How a man named D.D. Palmer changed the world…

Harvey Lillard was working away, just as he had done six days a week for as long as he had his job. He was a janitor and handyman for the Ryan Building on Brady Street in the bustling town of Davenport, Iowa. He liked the work. It kept him strong. But something was about to change for Harvey that would place his name in the history books forever. First, however, we must take a look at what happened seventeen years earlier. It was nothing unusual. In fact he had done it hundreds of times before. He was bent over in a crouched, stooped position. He did it every day. Why should this be different than before?

That was the last sound he heard. It came from the upper part of his back. At that moment Harvey entered a world of silence.

“What just happened?” His mind began racing. All he knew was that his back hurt and he could not hear. It took him a minute or so to get his bearings. No one else noticed. Suddenly, he felt alone. Not knowing what else he should do, Harvey kept working. Over the years he sought treatment from doctors and spent his hard earned money on procedures and remedies that did not work. He was tired and frustrated from all the years of silence from that fateful day.

D.D. Palmer leased office space in the building he worked in. He liked Mr. Palmer and had told him abouthis sudden deafness years before. Mr. Palmer examined his spine and noticed a prominence in his middle back, exactly where he felt the crack seventeen years earlier. D.D. cleared off his desk and asked Harvey to lie across it. D.D. was certain that there was an improper relationship of the spinal vertebrae and that this ‘dis-relationship’ caused his deafness. This became know as a subluxation.

D.D. placed his hands on the prominence… and pushed. Within three days Harvey’s hearing was completely restored. He stated that he “could now hear the racket of a wagon on the street or the ticking of a watch.” Chiropractic was discovered with a Canadian-born man and an African-American meeting in the Heartland of America. That first adjustment to Harvey’s spine from D.D. birthed the world’s largest non-invasive, drug-free field of health care that now reaches every corner of the globe and touches the lives of millions each day. 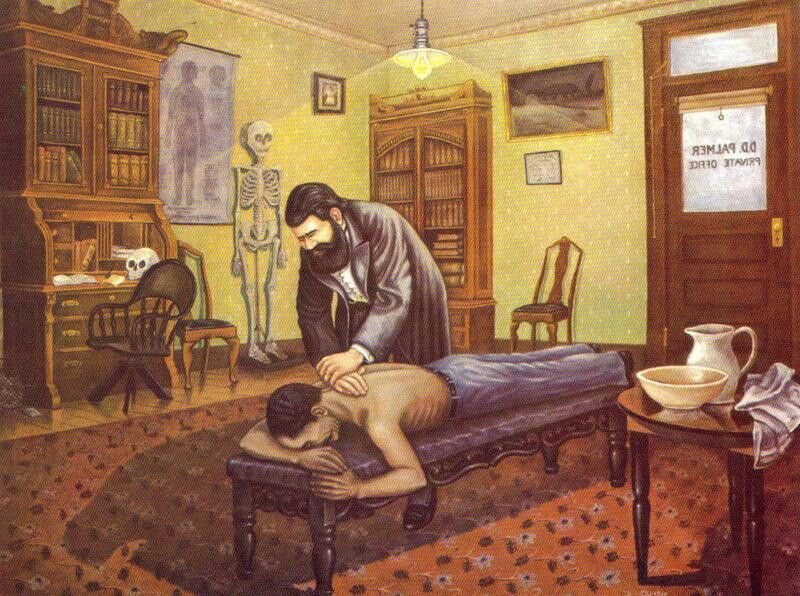