Chiropractic techniques fit into three basic models based on the three body systems primarily addressed by Chiropractors. It intimately involves itself with the skeletal, muscle, and nervous systems. Therefore, while all Chiropractic techniques involve all three systems, the techniques themselves can be differentiated from one another by the methods of assessment and correction.

Segmental (skeletal system-centered) Chiropractic techniques adjust vertebrae that are not in an optimum position back to a more nearly normal position and, in so doing, affect the skeletal system first, then the muscle system, and finally the nervous system.

Postural (muscle system-centered) Chiropractic techniques involve first putting tension or relaxation within the muscle system in order to allow an easier structural adjustment to take place. By doing this, the muscle system is involved first, which then aects the skeletal system and then, finally, the nervous system.

Why a Tonal Approach?

Since all three models work and produce good results, why would you prefer a tonal approach? The answer comes in understanding 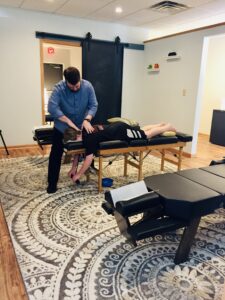 As a tonal Chiropractor, I know the results I get in my practice come because I correct nervous system interference first. You don’t need to seek out other therapeutic methods for an adjustment to take place. Ultrasound, muscle stimulation, or “magic gel number 12” (there is no such thing, of course) do not correct subluxation and are not necessary when a tonal approach is used to care for you.

To find out how tonal chiropractic can help you be healthier than ever before, contact us to set up a complimentary consult.